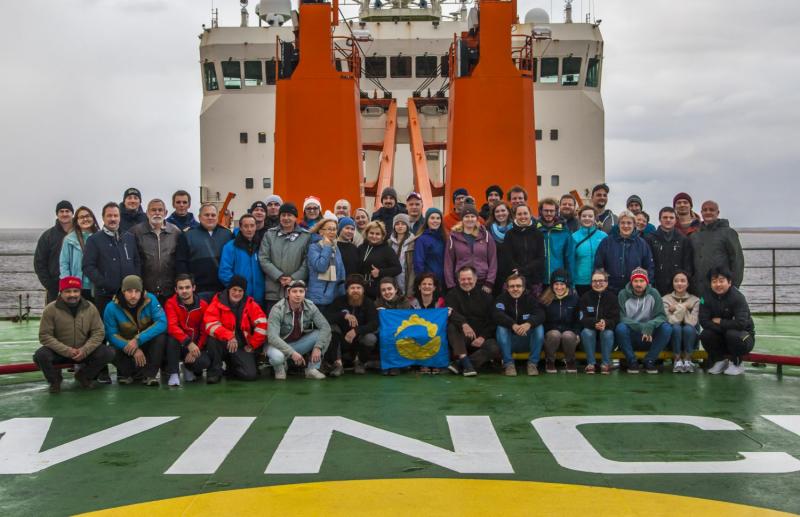 This is our last day at sea before reaching Arkhangelsk. More Minke whales were spotted this morning. The end is near.

Well, Mother Nature didn’t let us down. We had the roughest day and night of the whole cruise pretty much when we entered the Barents Sea. I was in the computer lab when the chairs went flying and the two desk top computers fell over. I was holding on to the computer monitor and my laptop so they wouldn’t be damaged. My smart phone slid off the table and continued sliding on the floor. I have a bruised thumb and a small gash on my shin. At the same time, some of the expedition members were watching a movie in the hangar, and ‘everything started flying’. There was a lot of scrambling and commotion to get things tied down. As mentioned in a previous post, we have been very lucky as far as calm seas this cruise.

Last night was the expedition party for the culmination of the cruise. The following highlights were shared:

A special thank you goes to PhD Student Channing ‘Diesel’ Bolt for being the “dish dog for life” and trying to keep the hangar ‘kitchen’ in order. A lot of cooking was done during the graveyard shift.

Hoar frost is a deposit of needle-like ice crystals formed by direct condensation at temperatures below the freezing point- 0˚C (32˚F). (see photos)

Last of the Birds!

Ross’s Gull. Rhodostethia rosea (rose-breasted rosy gull). British naval officer and explorer James Clark Ross (1800-1862), discovered this species in 1823 on the Melville Peninsula, Canada. Nests June-July on marshy tundra and boggy forest-tundra including near the Kolyma River in Northeast Siberia. Their migratory patterns are poorly known, but known to move north from Point Barrow, Alaska, in the fall. The gulls winter on the open water or at the sea ice edge around large polynyas (open water).

They have a graceful, tern-like flight. Forages singly or in small flocks on the open sea or at pack ice edge in winter. Feeds on small fish, plankton, crustaceans, mollusks, and marine worms taken at the sea surface; also takes beetles and flies, and forages like a shorebird on mudflats. During breeding season, feeds extensively on crustaceans rich in red-pigmented carotenoids, especially astaxanthin, which produce the rosy flush on the breast feathers. (The Arctic Guide, Sharon Chester)

We arrived in Arkhangelsk late afternoon and waited for the pilot boat to lead us to the dock. The day was pretty much spent making sure everything was packed, saying good-byes, taking an expedition group photo, and exchanging photographs and contact information.

Most of the expedition members left the ship this morning. The Koreans and Americans (Alaskans) were going home through Moscow, and the Germans and Russians were leaving out of Saint Petersburg. A few NABOS team members stayed onboard to unload in Kirkenes, another two-day journey after going through customs in Arkhangelsk.

Our last breakfast was served at 6:30 and buses were boarded and left at 7:15.

Before leaving the dock area, we had to go through customs. During this time, we had to say good-bye to Rosetta the Bumblebee. Simon had very carefully packed her in a box. It was sad to see her go, but she was back in her natural habitat which was good for her. (see photos)

I am finding it difficult to wrap up this blog. Even though the time seemed to go by so quickly, it seems like forever since we first boarded the Akademik Tryoshnikov in Kirkenes, Norway on August 11. A special thank you goes to Co-Chief Scientist Rob Rember for inviting me on this incredible once in a life time journey. It was above and beyond what I ever expected.

Special thank you’s also go to the scientists and students for being so patient with their explanations and answering my scientific inquiries. I learned so much and am excited to share my experiences with my students and teacher colleagues. A highlight for me was meeting people from all around the world, especially the Russian ship crew members who were so kind and helpful.

Another thank you goes to PhD Student Till Baumann, my office mate, for being very very patient, reminding me what ADCP stands for, showing me shortcuts on my computer, and many many other things, too many to mention.

And, most of all thank you to Heather McFarland for putting this wonderful blog together.