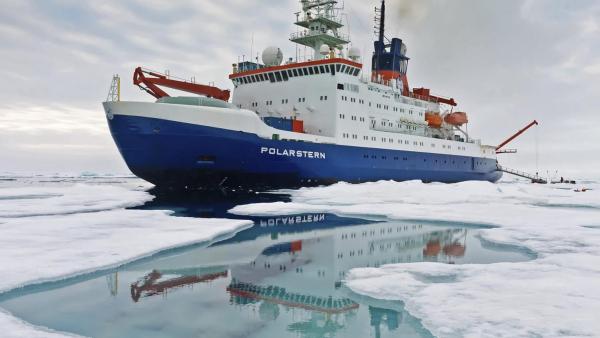 Five UAF researchers are among hundreds of scientists worldwide who will spend part of the coming year on board a research ship frozen in the Arctic sea ice.

The 387-foot icebreaker Polarstern will embark from Tromsø, Norway today to kick off MOSAiC, the world’s largest and most comprehensive expedition to the central Arctic Ocean. During the next year, the Polarstern will be locked in the frozen sea ice and set to drift past the North Pole. The UAF team will share their experiences via a weekly blog.

The Multidisciplinary Drifting Observatory for the Study of Arctic Climate will capture chemical, physical and biological data related to the ocean, sea ice, snow and atmosphere. The goal of the project is to understand why the Arctic is warming faster than any other region on the planet. Arctic sea ice loss is already impacting sea level rise, storminess, and ocean and atmospheric warming at lower latitudes.

More than 600 scientists from 17 nations will participate in the expedition, which is led by the Alfred Wegener Institute, Helmholtz Centre for Polar and Marine Research. An international fleet of helicopters, aircraft and icebreakers will supply the team during its voyage.

Rob Rember, a researcher at the International Arctic Research Center and UAF’s science lead on the expedition, expects that MOSAiC will multiply the amount of existing data by a factor of a thousand.

“The amount of sea ice data physically collected [from the Arctic Ocean] from October to March is very, very small,” Rember said.

Rember will be at sea for 100 days this year. The UAF team will rotate through several shifts on the Polarstern. UAF postdoctoral researcher Marc Oggier will spend 195 days at sea, getting through the long, dark months with 10 pounds each of good chocolate and yerba mate.

These areas are where gases and nutrients are transferred between the ocean and ice, and the ice and the atmosphere.

“Think of sea ice as a substrate where life can be and where nutrients get cycled and recycled,” said Ana Aguilar-Islas, MOSAiC participant and an associate professor at the UAF College of Fisheries and Ocean Sciences. In the ocean system, these nutrients are used by phytoplankton and sea ice algae to grow and ultimately feed the rest of the food web.

“It’s basically the same as your garden; you need the right mixture of nutrients to be productive,” explained Rember.

The Polarstern will be attached to the same sheet of floating ice for the entire seasonal cycle, which will allow the UAF team constant access to the ice. They will gather sea water, snow and cores of ice drilled from the frozen sea, then melt, filter and analyze the samples in a lab onboard the Polarstern and back at UAF to quantify their nutrient content.

“Throughout the whole year, every week, we are going to make the same set of measurements,” Oggier said. Those measurements will show how nutrients in the Arctic change throughout the year.

Since space is limited on the ship, each researcher will do a variety of tasks in addition to their own research. For example, Oggier will help other scientists survey ice ridges, use underwater cameras to explore the bottom of the ice, and take images of ice and snow using MRI-like instruments.

As a young scientist, this part of the expedition is an opportunity that many people would dream of, Oggier said. “I’m really excited because I’m going to learn lots of stuff.”

“Being in the Arctic on this expedition that is sort of historic, just being part of it, is going to be awesome,” Aguilar-Islas said.

MOSAiC is offering researchers a chance to be a part of something extraordinary, Rember said, “This opportunity will never come along again.”

In addition to Rember, Oggier and Aguilar-Islas, other UAF participants include Mette Kaufman, a research professional at IARC; and Rachel Lekanoff, a doctoral student in CFOS. The National Science Foundation is funding UAF’s participation in MOSAiC.