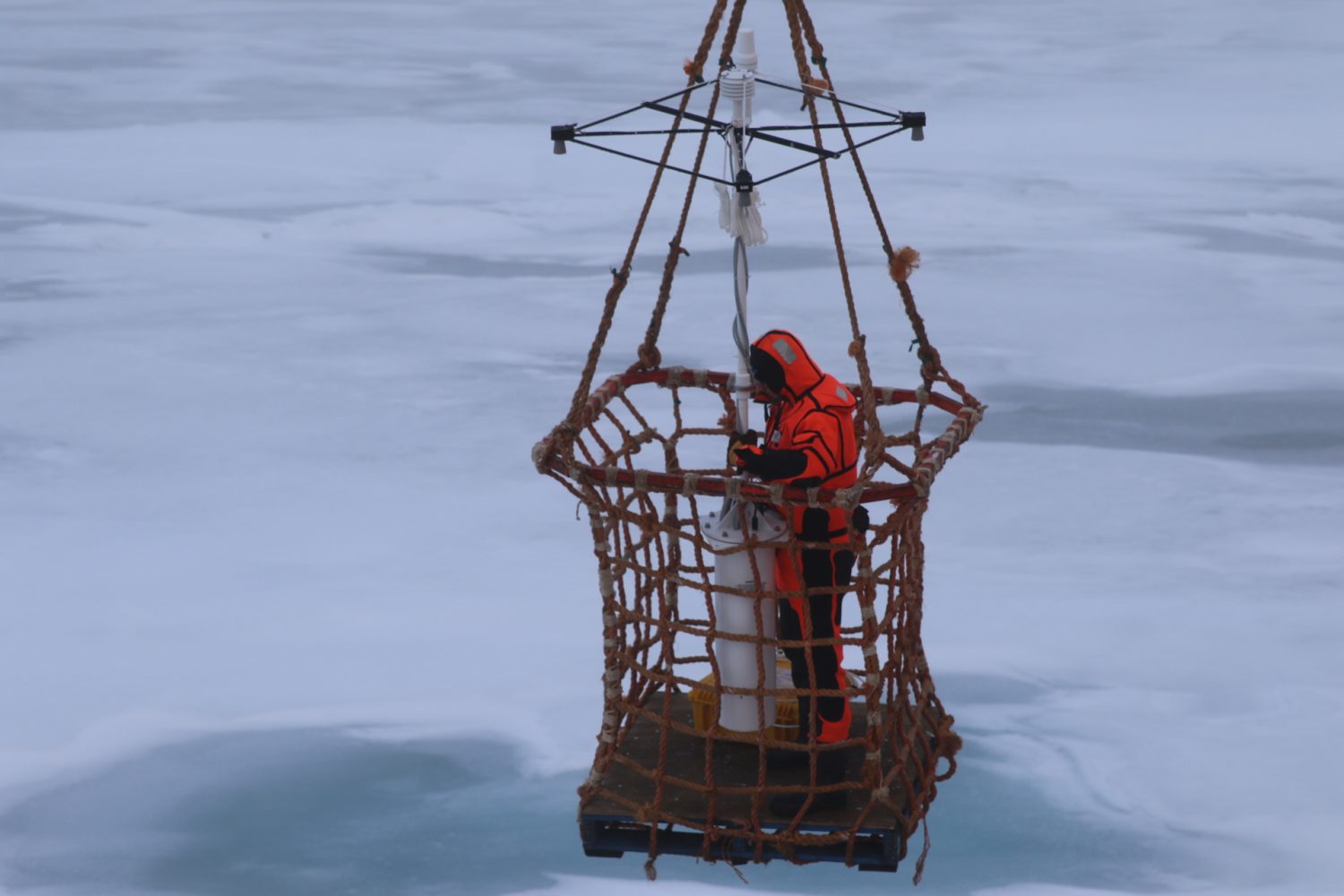 Everyone is exhausted after the exciting big ice station that started at 9:00 pm last night and ended around 11:30 this morning. Twenty-five scientists and students participated in the ice activities, and two polar bear guards took turns standing watch.

I would like to continue the conversation started yesterday by introducing the two polar bear guards who are also scientists. Oceanographer Vladimir Bogdanov and hydrologist Vasily Kuznetsov, both from the Arctic and Antarctica Research Institute (AARI).

At least one, if not two guards are on the ice watching for polar bears. No one goes on the ice without a polar bear guard. There are also volunteers on bear watch on the bridge at all times during an ice station. I like to volunteer because the view from the bridge is spectacular, and it is only under special circumstances that we can go on the bridge. The bridge is kept quiet, and dark so it is easier to see outside.

I have been watching the preparation for the ice stations for weeks now, mostly the team members getting the instruments ready for deployment. Now, it is very exciting to see everything in action.

Once a sufficient ice floe has been found, the ship is anchored placing empty steel cylindrical gas containers which are about 1 ¾ m (5 ft) in height and 20 cm (8 in) in diameter into the snow. The anchors are put into the ground at an ~45˚ angle, like tent spikes, with ropes from the ship attached. Then a small crew of two or three people are sent out on the ice to survey the floe for safety. A long-poled chisel is used to test the stability of the ice, and a ground-based electromagnetic (GEM) instrument determines the thickness of the ice. When everything is secure, instruments are deployed and set-up. The teams are on the ice at different times with no more than nine people at a time. The reason only nine is in case a polar bear is sited, only nine people can fit in the basket that is lifted back to the ship.

Rosetta the Bumblebee Update: Rosetta continues her routine of napping in her tent or her comfy corner, and taking short flights to the port hole.

This has been our coldest day so far. The sun peeked out briefly this morning, the first time in a long time. We are still in the East Siberian Sea purposely looking for ice to set up ice stations.

I would like to continue where I left off yesterday. The next step after anchoring the ship and making sure the ice floe was safe enough, is deployment of the equipment. Two cranes were used, one on the bow, and one on the aft. The crane on the bow downloaded the heavy equipment including the skidoo snow machine that was used for transporting heavy equipment. I was sorry to miss seeing the snow machine lowered from the ship. The aft crane transported the team members and light equipment to the ground using a rope basket. The ship’s crew and TICE team members were very busy and focused, and so everyone stayed out of their way.

Two types of sledges (sleds) are used for transporting the equipment on ice- Nansen and pulka. When Fridtjof Nansen planned his traverse of the Greenland icecap in the late 19th century, he rejected the complexity of a large expedition, planning to deploy a party of only six men. As the result of this, most of his equipment had to be designed from scratch. One of the bit of kit (gear) he designed is the iconic Nansen sledge. The sledge is able to carry a load of up to 500 kg (1,100 lb), while coping with difficult and varied terrain: wind packed snow, ice, sastrugi or soft snow, as well as with cold temperatures. The sledge hasn’t really changed since the original design and is still used today for all field activities in both the Arctic and Antarctica. (beautifulocean.org)

A pulka (from Finnish pulkka) is a Nordic short, low-slung small toboggan used for transport, pulled by a dog or a skier, or in Lapland pulled by reindeer. The sled can be used to carry supplies such as a tent or food, or transport a child or person. In Norway, pulkas are often used by families with small children on skiing trips (small children being pulled by the parents). In Finland and Sweden, smaller plastic pulkas are often used, mostly by children, as a winter toy for going downhill. (wikipedia)

Rosetta the Bumblebee is alive and well! She probably missed Simon because he was either working on the ice or sleeping!

A pulka sledge being loaded on to the basket with bear guards Oceanographer Vladimir Bogdanov and Hydrologist Vasily Kuznetsov looking on.

A pulka sledge is packed with a drill, drill bits and saws ready to go on the ice.