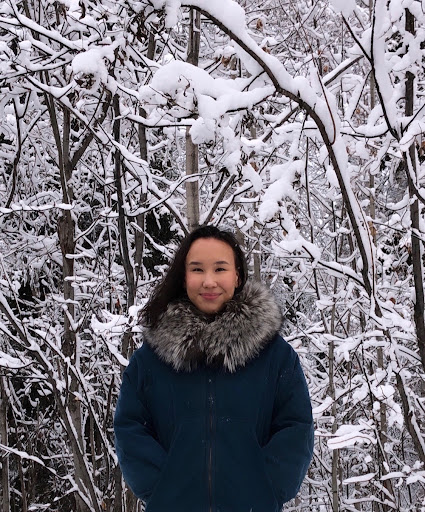 In the storymap, Roberta Tuurraq Glenn combined observations from community members across Arctic Alaska with data collected in the same communities as part of the Alaska Arctic Observatory & Knowledge Hub.

Glenn, who is from Utqiaġvik, began her studies in geography in 2014 and sees community-based monitoring as both a challenge and an opportunity.

Her work connects scientific data points to information collected through years of careful observation, with the intention of better informing planning, mitigation and adaptation in coastal Alaska.

“Indigenous knowledge holders have a wealth of information about the environment around them and how it’s changing. That wisdom is necessary to be able to safely hunt, live and thrive in the Arctic,” Glenn said. “I believe it is also necessary to understand and mitigate climate change impacts.”

Glenn’s work has been a critical part of the success of the Alaska Arctic Observatory and Knowledge Hub. AAOKH is a project housed at UAF’s International Arctic Research Center that supports a network of local observers and scientists to monitor changes in weather, wildlife and climate across northern coastal Alaska, from Qikiqtaġruk (Kotzebue) to Kaktovik.

In a webinar on Aug. 17 at 11 a.m., Glenn and others will walk through the AAOKH network and the new storymap to illustrate changes seen by both Indigenous and western scientific observations.

Across five coastal communities, observers share frequent reports with detailed information about sea ice conditions, temperature, winds, wildlife and more. The growing dataset now contains over 8,000 unique observations, many of which are shared through Facebook to encourage collaboration and communication across communities.

Glenn’s storymap adds one more communication tool to the knowledge hub by tying the voices of observers to the data they’ve collected and the trends they’ve observed.

“I wanted to uplift the stories behind the science and try to adequately represent the perspectives of Arctic Indigenous people and the impacts they experience in Alaska’s changing environment,” Glenn said. “So often in popular media Indigenous communities in Alaska are described from the perspective of people who don’t live there.”

“The rhetoric around climate change and Alaska Indigenous communities has been molded by the perspectives of those who lack the understanding of what it means to be living with these changes everyday. This is just one attempt at doing that,” Glenn said.

The storymap includes photos taken by observers across the network, alongside audio recordings, their text observations and an interview conducted on the Arctic sea ice near Glenn’s home on the North Slope.

The webinar will be presented as part of the Alaska Tribal Resilience Learning Network’s ongoing series of information sessions. A recording will also be available on the AK TRLN Resources page shortly after the event.

Another part of Glenn’s work was conducted through the Alaska Sea Grant-funded Stakes for Stakeholders project. She worked with five communities in the Bristol Bay region — Dillingham, Ekuk, Levelock, Pilot Point and Port Heiden — to develop erosion data products using measurements collected at monitoring sites. These monitoring efforts in several western Alaska communities are led by the Arctic Coastal Geoscience Lab at UAF.

“This data isn’t for us,” Glenn said. “It’s to support local decision-making in communities. So we really want to identify ways we can adjust our data products to better equip them with the tools and resources that they need to plan for the future.”