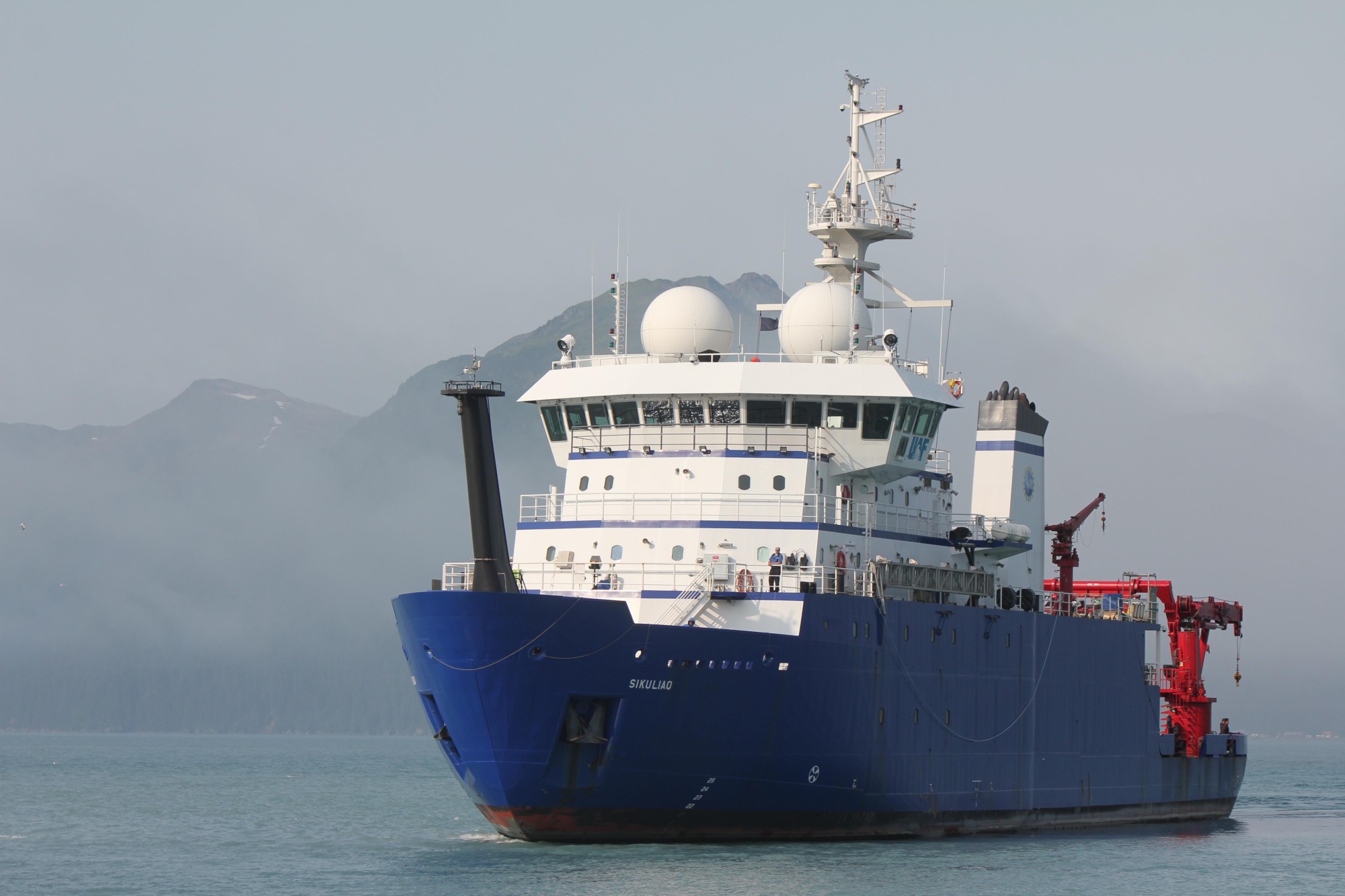 A team of scientists will soon head to the Aleutian Islands aboard the research vessel Sikuliaq on a voyage to reconstruct the region’s ancient history of powerful storms.

Little is known about the Bering Sea’s long-ago record of extreme weather and the factors that drove it.

“Learning about the past is the only way to confront the future effectively,” said associate professor Chris Maio of the UAF Geophysical Institute. “If we know storm frequency through time for thousands of years and we know the different climate factors, that knowledge will allow us to project what could occur and to be better prepared for it.”

Maio heads the Geophysical Institute’s Arctic Coastal Geoscience Lab and is leading the UAF contingent of the voyage’s 20-person science team, which includes some graduate students.

The Sikuliaq is scheduled to depart its home port of Seward on Sunday.

The collaborative research is being led by the Woods Hole Oceanographic Institution, with the University of North Carolina Wilmington also involved. The National Science Foundation is funding the research.

The Qawalangin Tribe of Unalaska is also a partner in the research. Tribal members provided guidance for fieldwork planning and will be involved in outreach activities. Two tribal members — one undergraduate student and one adult mentor — will join the research cruise.

To turn back the pages of the weather history book, the team will explore numerous bays and fjords at Unalaska, Adak and Atka islands along the Aleutian Islands chain. The monthlong voyage will build on findings from 2011 and 2021 reconnaissance trips to Skan Bay on Unalaska Island aboard a fishing vessel.

The nearly enclosed bays and fjords allow sediment layers of varying coarseness to build up largely undisturbed over centuries, providing a highly detailed timeline of when heavy storms eroded coastlines and redistributed sand.

Researchers will take seafloor core samples from aboard the Sikuliaq at deep locations and from a pontoon boat at shallower sites. Some will also go ashore to look for beach ridges left as the shoreline changes over time..

Separately, a doctoral student will produce records of ancient tsunamis. Storms and tsunamis both form layers of coarse sand.

“We are looking to understand storms over the past 2,000 years or so and also learn how modern storms impact the area,” Maio said. “Understanding how a modern storm moves sediment through a particular lagoon is going to help us interpret the ancient core data.”

Research professor Vladimir Alexeev of the UAF International Arctic Research Center will use the produced storm timeline, along with local storm records and atmospheric and erosion patterns, to build a computer model that reconstructs past storms.

Alexeev, who will remain in Fairbanks during the voyage, hopes the model will set up scientists to predict future storminess.

“We could show what the climate was like in the past. The sediment timeline can be overlapped with stories from people,” said Alexeev, a climate modeler and co-principal investigator on the voyage.

“By looking at these two things together and the known historic storms, we hope to say how reliable this kind of approach is,” he said. “And that can allow us to extrapolate further back in time even to ice ages and help us look into the future.”

“Information shared may include personal observations and stories passed through the generations that may offer deeper insight into how the ecosystem has changed over the decades and what implications these changes may have for local communities,” she said.

“We believe this model of researchers freely sharing their Western science knowledge while inviting Indigenous knowledge holders to a full partnership in the research project will lead to the most valid and relevant results,” she said.

UAF’s College of Fisheries and Ocean Sciences operates the Sikuliaq. The National Science Foundation owns the vessel, which is the only ice-capable vessel in the U.S. academic research fleet.