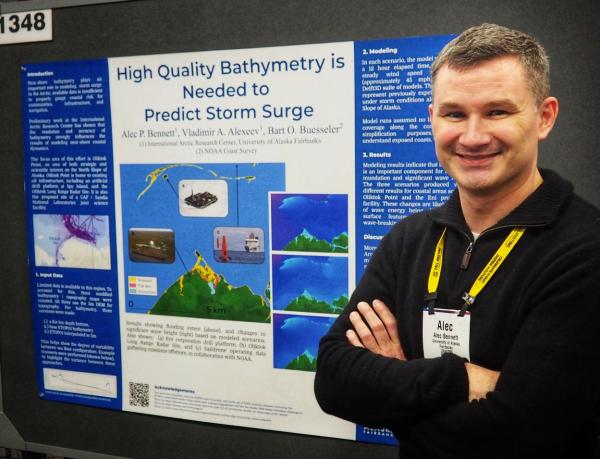 Along Alaska’s Arctic coast, no one can predict exactly where floods from storm surges might occur, partly because no one has a good picture of the seafloor.

Bennett is a computational modeler at IARC. Along with Vladimir Alexeev, also with IARC, Bennett is analyzing data collected in the Arctic through bathymetry, the study of the “beds” or “floors” of water bodies. They’re trying to learn how the quality of bathymetric data influences projections of coastal erosion and flooding from Arctic storms.

While employing high-resolution modeling techniques to simulate large-scale storm events and their related effects, they discovered that their results varied substantially with bathymetry data. Some data overestimated flooding and significant wave heights, while other data did the opposite.

The uncertainty was due to a lack of detail in the data.

In Arctic Alaska, the only continuously available bathymetric data ignores smaller-scale land details such as barrier islands and spits, which also happen to be places where communities are often located. These features should be included to prevent skewing the results of nearshore model simulations, Alexeev and Bennett found.

Greater human activity in the Arctic and reduced sea ice coverage from a warming climate have increased the interest in more accurate models to help with risk analysis and adaptation planning. But the lack of high-resolution data prevents their creation.

Good data drive great models. Alexeev and Bennett’s work illustrates the need for more complete data to power better model projections. UAF is an ideal place for his research because he can take advantage of powerful computing resources and collaborate closely with others who are also trying to understand the Arctic’s complexities.

The bottom line? Better modeling of Arctic coastal and nearshore events would reduce uncertainty about the risks to the Arctic posed by changing conditions.