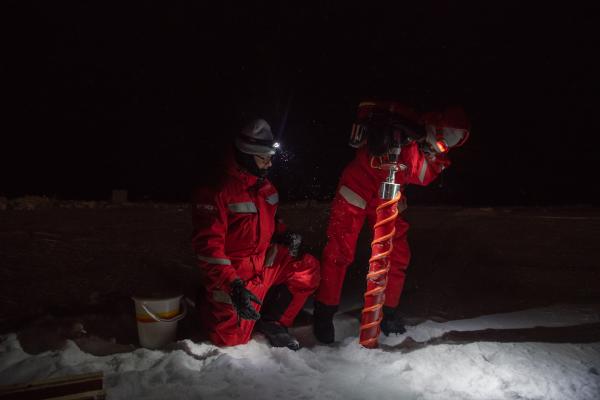 The ice continues to open and close at a series of cracks that exist throughout the camp. Several low-pressure systems came through the area rearranging the ice and creating new ridges and leads. Luckily none of the established installations were disturbed, but our path to the ice coring sites had to be rerouted due to a 3 to 4-foot crack slightly too wide for a snow machine to cross.

Luckily, we had several days of ~-30°F which refroze any open water. A day of road building is ahead of us to re-establish our network of paths through the surrounding area and out to our outlying work sites. The cold spell was accompanied by days of relatively calm winds, mostly 10 to 15 knots. Even though the winds were calmer than normal, the combination of wind and cold dropped the wind chill into the -40s.

We had tremendous luck with sampling these past few weeks, managing to collect all 25 cores from both the first- and second-year ice sites every week since we began coring 6 weeks ago. We lost some real estate to storms and shearing events at the thinner first year ice site, but there is still more than enough room for a year of science.

The ice grew about 20 cm at the second-year ice site over the six weeks whereas the first-year ice site grew ~35-40 cm during that same amount of time. The first-year ice was thinner with substantially less snow (thus less insulation) allowing the cold from the atmosphere to penetrate and ice to grow faster.

Water sampling is going well. We complete 6 CTD casts to 4400 meters weekly and numerous others to shallower depths. Maintaining a hole beside the ship requires a substantial amount of work. While the pump does a great job at keeping the water open, ice around the side of the 6 by 6 foot hole grows in and requires cutting back several times a week. We hope to complete another week of water sampling tomorrow, but that will require the gale force winds we have dealt with for the past two days to abate so we can operate cranes and other equipment.

In addition to the normal day-to-day and week-to-week tasks, we are now preparing protocols explaining our routine to pass on to those following us. A ship left Norway and will make its way to us in the next 7-10 days. We expect to transfer equipment and provisions for ~7 days while we show our replacements their tasks. After the gear transfer, we will leave and return to Tromso, possibly around Christmas. Dates are certainly not set as ice conditions and the Arctic will likely alter our plans again, but there is light at the end of our tunnel. We should see the sun by January.