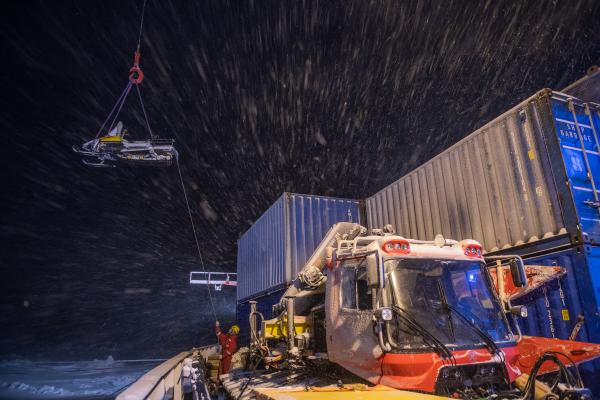 We have finally entered the stage of the expedition where we feel as though we are working through a weekly routine. This past week was the first where we were able to achieve all the work that was on our schedule. This includes ice coring, water sampling to 4000 m and many net deployments (biology) to various depths. Our last coring on Monday, November 11, was again very successful.

We began the day with the promise from our onboard meteorologist that winds would gradually increase throughout the day. It was -22F and blowing 10 knots when we left the ship. Even though we had some personnel substitutions, our work was completed just as the wind began to increase. By the time we had finished and were ready to leave the site, it was blowing 20 knots and when we arrived back at the ship the wind had increased to 25 knots. It was lucky, but good timing on our part. The remainder of the week was occupied by processing ice samples and water sampling from the ship. On Friday, we were notified that the weather was going to get substantially worse over the weekend and that by Sunday winds would exceed gale force (~40 knots).

On Saturday, we quickly went out to sample the first- and second-year ice sites in case our Monday coring was cancelled. We collected the cores for the most basic parameters (temperature, salinity, nutrients) at both sites and returned to the ship. The storm came on Saturday night and continued all day Sunday as predicted. Winds consistently exceeded gale force for most of the day. The ice opened and closed in front and to the side of the ship several times. At one point from the bridge there was 150 ft of open water with waves beginning to form, while on the other side the ship continued to be moored to the ice floe. There were large cracks that opened all over our local area (ocean city, remote sensing, ROV site etc.) and stayed open for many hours. We had substantial damage to several power lines as the flow separated and came back together.

This morning the wind is still up around 30 knots and the damage assessment has begun. We surveyed our coring sites, they are completely intact and can be reached with minimal detours. UAF science has luckily fared well. Other sites will require some major rebuilding with power nodes (1500 lbs) tipped over as ice drifted/sheared and pulled on cables that were fixed to the power distribution hubs.

In the next 30 minutes we will have a meeting to discuss the new steps. The ice is still moving and we are not in a stable situation to begin rebuilding. Even so, the UAF team will head out this afternoon to continue the sea ice coring times series we started approximately a month ago.