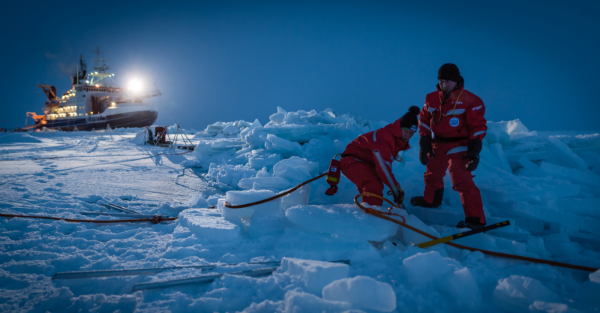 It has been some time since I have been able to sit and write an entry recapping our drift. I suppose I should start with the drift; we have been adrift (moored to an ice floe) for ~2 weeks. Our drift speed really depends on the wind at this point. We moved south for much of the first two weeks at less than a knot most of the time. However, about two days ago the winds shifted and are now out of the south, we moved north finally passing our starting point. We are now hopefully moving towards the North Pole and Fram Strait (eventually next summer).

We have had some interesting adventures with the ice cracking and opening leads near the ship. This has removed some of the real estate that we thought we had for experiments. For example, an ice section broke off and sent an installation about 1 km away, more on that in a minute. Weather has been quite nice, 0 to 20°F, although the wind can drop the temperature well below 0 on some days. We are in the dark most of the day, with a little light penetrating the clouds if we are lucky, but not enough to allow for definition between snow drift, ice ridge and flat trail.

Much of the work to construct the power lines and installations (cities) has been completed. Power lines are run in ~100 meters lengths out to the remote sensing site, the ocean city site and MET city. The power lines are strung over a series of tripods (every 10 feet) with enough slack to allow for some play should the ice shift or open up in the coming months. Although there are plans for disconnecting should the floe disintegrate quickly.

As of right now, all remote sites are capable of collecting data. Those that are collecting data tend to be designed for remote operations with only occasional visits from technicians to brush off snow and make sure nothing is amiss. Other sites like ocean city require a human to physically lower instrumentation through a hole in the ice and collect data. Marc and I assisted in building that camp last week. We cut a hole through the ice and constructed a ‘weather haven’ over the top. The weather haven is constructed on small pieces of flotation (plastic hollow squares) that are arranged in a rectangle about 30 feet x 20 feet. A floor was then constructed on the floats. The floor has a hole that is ~ 4 x 4 feet to allow access to the ocean. The hole is maintained by lowering a submersible pump that constantly pumps water to the surface from a depth of ~5-10 feet. So far, the hole has not frozen and is the same size as when we opened it up.  Right now the oceanographers are testing equipment and planning to start CTD (Conductivity, Temperature, Depth) casts in the very near future.

Earlier this week, as the winds shifted and some ice floes changed direction we had a series of ridges appears off the bow of the ship. One evening as the winds and pressure in the ice relaxed a series of cracks opened around the ridges and through some of our power lines and roads. This cut off ROV city (remotely operated vehicle) from the ship. A ‘rescue’ team went out immediately to cut the power and retrieve/disconnect as much power cable as possible. By morning the camp had drifted a half a mile away and a larger operation was undertaken with the helicopter (helo) to retrieve the power hub (500 lbs), the ROV hut and the ROV itself. This operation involved building bridges across the leads to allow personnel to cross and assist the helo with retrieving the equipment. It took a good portion of the day.

We recently were reunited with members of our team on the Fedorov. The Fedorov housed many scientists during the past several weeks such as specialists from the US ARM (DOE) program. The team team installs very complex instrumentation on the ice and in containers on the Polarstern (These containers are usually 20 x 8 ft steel boxes that you see on the highways or railyards moving freight. Containers placed on scientific vessels are exactly the same, except they are outfitted with insulation, interior walls, power and workspaces to house scientific equipment). This past weekend the scientific party that will remain on the Polarstern until December was shuttled via helicopter from the Fedorov to a location about 1 km from our location. Many snowmachine excursions later, all the personnel were exchanged and transported to and from the helipad. The following morning the Fedorov left for Tromso. Meanwhile, we had many planning meetings regarding our current setup and plans with those who joined us onboard the Polarstern.

For the past several days Marc and I have been exploring the ‘fortress’ region of our ice floe. We are in search of sites, large enough to sample for a year, with ice that survived the summer, or what will soon become multiyear ice. We flagged several large areas (500 feet x 1000 feet) to sample in the coming months. We also identified a large area of new ice we’ll sample at the same time to compare first year ice to multiyear ice. It is often nice to be just a mile off, away from the ship’s commotion, looking at new areas. There are some very complex ice formations (ridges) there so we flagged roads to find our way out when the wind covers the trails. Despite being called back to the ship a couple times due to distant bears approaching, we have not had any encounters. From the bridge, we did see where several tracks of large bears approached undetected.

Maps of the sea ice and camp layout near the MOSAiC expedition (left shows the larger area 7+ km wide, while right shows the 1 km around Polarstern). From Rob Rember

In the coming days we have some team installations to do, including installing a camera system at a depth of 300 meters. The camera will take images hourly over the next year from two perspectives. Hopefully we will capture fish movement in the warm(er) Atlantic water that is found between 300 and 750 m in this region. We will also install a sediment trap (catches falling particles from above) by the end of the week. These are the two final installations before we begin our routine science operations, hopefully next week.

Go back to MOSAiC expedition homepage.