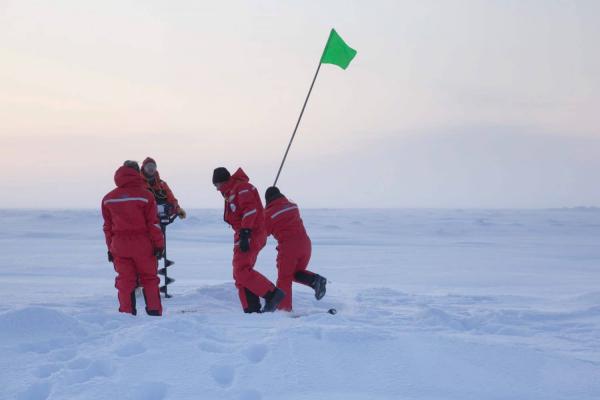 Progress in the central observatory is noticeable. The main “road” system is now flagged. Met and Ocean city (science outposts) construction and the remote sensing area are taking shape with the hut that shelters the equipment constructed and the power lines installed.

Yesterday the largest hole (1.5 x 1.5 meters) was cut in a refrozen melt pond using two ice saws. Since the ice was young (only about 30 cm thick) and still “warm” it took only about one hour to extract the nine blocks of ice.

In the afternoon we installed a round double layer floor (with insulation in between) around the hole. It will be used as base for the “space station” tent, which is a giant dome. The site is currently named the “Oasis” and will serve as ROV (underwater vehicle) base.

In the afternoon, as the tent was laying down and we were installing the poles, polar bears were spotted. They were on our starboard (right) at 17h00. All teams on the ice received the order to go back to the ship.

Marc sent that message, then got ready to go back on the ice, returned 30 minutes later …

Again two more polar bears were spotted and we halted work before it even started.

Good workday these last two days. The ROV hole we opened two days ago refroze over night. Beautiful frost flowers grew on top of the new ice. We removed the ice (8 cm thick) and built the dome tent. This morning the ice had only grown to 4 or 5 cm, with less and smaller frost flowers.

Go back to MOSAiC expedition homepage.