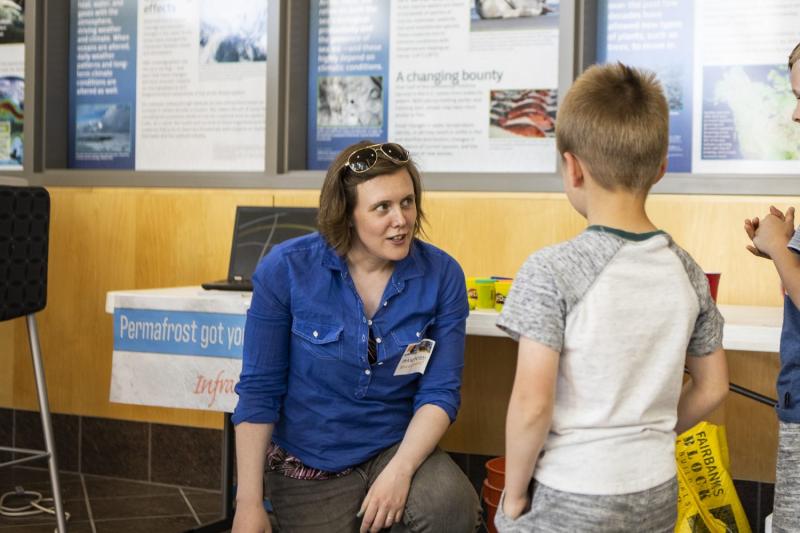 On May 30th, the International Arctic Research Center, alongside the other research facilities on UAF’s west ridge, showcased their science. From climate change, to forest fires, to potential futures without berries, all was on display for the public to learn about and interact with. Researchers lined the walls of the IARC lobby and the Akasofu-Elvey hallway, eager to share their work with the public. The guests of IARC seemed equally eager to learn, and explore today’s world of climate research.

One station was AlaskaVoices, a local podcast devoted to Alaska and the stories of the people living there. The podcast was on display inside an arctic oven, the iconic tent of Arctic research. Visitors were invited inside for the full ambient experience, alongside Bob Bolton, one of the authors of the podcast, who could answer any questions visitors might have.

“I just hope people’d be exposed to the project itself,” said Bolton, discussing the open house. The group doesn’t have a large presence yet and was excited to gain exposure during the event.

Part of the push this year was for more interactive stations that would let people experience for themselves a small piece of Arctic science. The more interactive nature of the open house improved engagement between the people visiting IARC and the researchers.

“It was definitely a step-up in our previous efforts.” explained Bolton. “We had a listening station last year, nobody listened… So this was a big improvement for sure. We had a number of people sit in it and listen.”

People were walking through the doors until the end of the three hour event, keen on meeting researchers who could share a glimpse behind the curtain to not just see, but interact with Arctic scientific research.