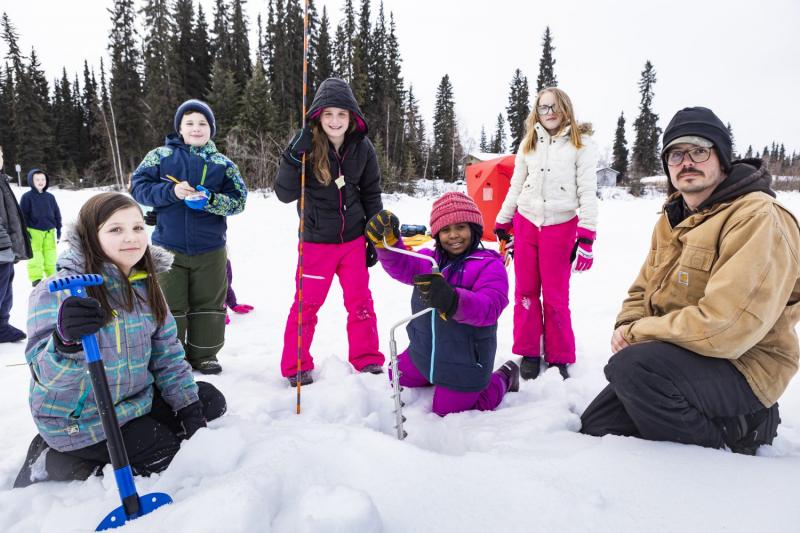 A new lake and river ice-monitoring project led by the University of Alaska Fairbanks gets kids involved in science while promoting ice safety and a better understanding of changing winter conditions.

Fresh Eyes on Ice is an observing network that explores the curious and fascinating aspects of frozen water and its role in the environment and Alaskans’ lives.

“People naturally pay attention to these kinds of things when they live in the North,” said project leader Chris Arp from UAF’s Water and Environmental Research Center. “People use ice for travel, for recreation; they are dependent on it, especially in smaller villages where transportation is more challenging.”

The project will explore where, when and why phenomena such as overflow occur. It will also produce a website where people can check ice conditions and explore other river and lake ice-related resources.

The network will cover Alaska’s western, northern and interior regions.

How can one project incorporate and understand ice conditions across such a large area? That question led Arp to recruit community participants and combine many scales of observation. Fresh Eyes on Ice incorporates data from historic monitoring networks, satellite observations, and monitoring stations on lakes and rivers. It also will use data collected by UAF scientists and community observers, including teachers and their students.

“There have been river and lake ice-monitoring projects in the past but nothing continuous,” said Katie Spellman, who studies ecology and education at UAF’s International Arctic Research Center. She has been tasked with designing a community-based approach to help sustain the Fresh Eyes on Ice observing network.

“If we want to sustain river and lake ice observing into the future, engaging multiple generations is critical,” explained Spellman. “We pair members of the community who have longtime knowledge of ice conditions with a local educator and their students.”

Fresh Eyes on Ice is recruiting community-youth partnerships to gather ice data across the state. So far, 11 communities have confirmed participation, including Galena, Shageluk and Noatak. Fourth-graders from Anne Wien Elementary School in Fairbanks also have signed up.

Arp and Spellman tested their ice-measuring protocols in March 2019 with the Anne Wien students in preparation for the official project kickoff next fall.

In addition to using data gathered by students, UAF researchers will spend three winters traversing the state by snowmachine to gather ice data at critical lake and river locations and to visit project participants. The expeditions will travel through Bethel, Nome, Utqiaġvik, Arctic Village and Fairbanks.

To learn more about Fresh Eyes on Ice or to express interest in participating, visit fresheyesonice.org.

Additional project leaders include Laura Oxtoby and Ben Jones. The National Science Foundation provided funding for the research through the Navigating the New Arctic grant.