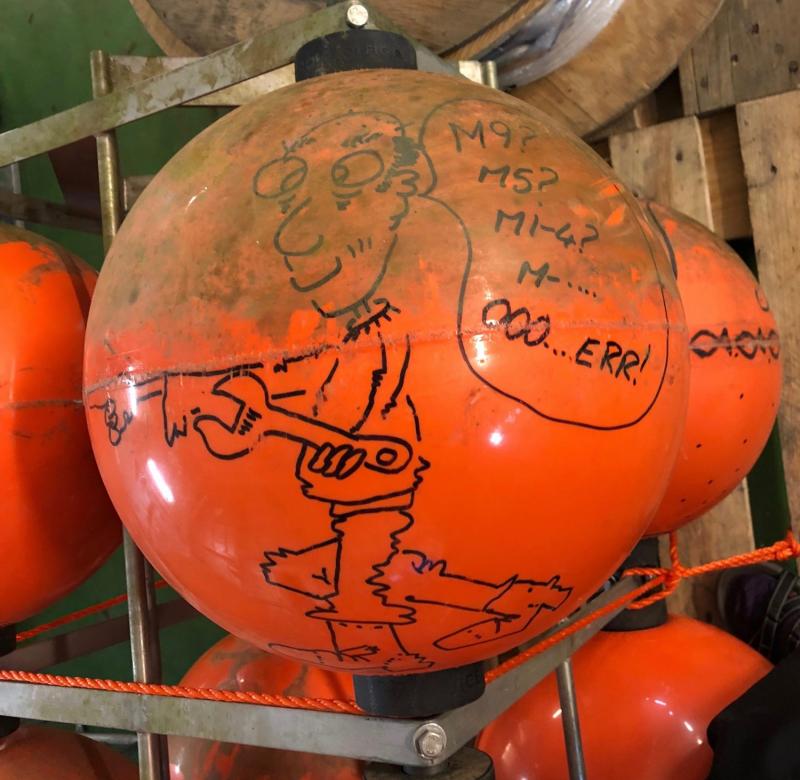 Where do I begin with such a huge personality? I suppose the first thing I should comment on is that we tried to teach him proper English so we could understand him, but that didn’t work. He just became harder to understand. We got used to his vocabulary which included words like washy washy, tweakery beakery, dingle dangle, my favorite- spikey tailed boo-boo bird (frigate), resty poo, data poo, jiggly jaggly bag, dd (double deadly), argy bargy, easy peasy, tillmouflage (camouflage), silly billy, and wiz, waz, wuz.

Ian lives in Bognor Regis, in the south of England. With a background in electrical engineering/electronics, he has worked in the marine physics division on vessels for 44 years, with a total time of ~16 years at sea. Those vessels include oceanographic ships, harbor tugs, trawlers, military, and rig supports.

Working on ships attracted Ian because he likes to work outside, see different places, and meet different sorts of people. He had never worked in the high Arctic and wanted to see what it was like. “It‘s not often you get a chance to see seals, polar bears, walrus, and arctic fox”.  Ian commented that in the early days some of these places were only accessible by ship, but not so much these days- you can go by plane.

What he liked most about deploying and recovering moorings is getting them back. And, as far as his favorite instrument, his reply was, “All the ones that work and produce good data.” And, I can’t forget to mention Ian is quite the artist. We looked forward to seeing his artwork pop up on floats during mooring recoveries. If you really want to get Ian riled up, just ask him about rope knots. He doesn’t like them because they tend to weaken the line by as much as 50%.

Ian spoke passionately about his favorite ship, the first one he worked on- the old Royal Research Ship (RRS) Discovery before her conversion. The RRS Discovery is similar to the Britannia, the royal yacht. All the old ships were nice ships. You had to know quite a lot about the sea and weather back then. She was a beautiful, friendly ship. The accommodation was basic with no single cabins except for the principal scientists. You had to get along with people. Later on, Ian occupied the pilot’s cabin, which was like having ocean front property with huge windows. The cabin was one deck below the bridge.

Ian has traveled all over the world including Antarctica, the North and South Atlantic, Caribbean, Mediterranean and Indian Ocean. He also volunteered to map the high Andes, which involved rowing boats in the Andes’ biggest lakes. The longest amount of time continuously spent at sea was nearly 12 weeks in Antarctica. What did Ian miss the most when at sea, “Apart from missing the Mrs. (hi Sarah), kids and grandkids, I didn’t miss anything.”

His trips to sea usually lasted between 6-12 weeks, and the only communication, at the time, was a medium frequency radio telephone. You had to go through the radio operator on board, and it was very expensive; otherwise, you had to wait to go on shore. There was no air conditioning and no internet. It could get up to 30˚C (86˚F) in the Indian Ocean. Films (movies) were shown once a week and watched over and over to the point of having them word perfect (memorized).

They were stuck in the biggest recorded storm up to that time in a tiny ship, the Royal Research Ship Shackleton, that was previously used by the British Antarctic Survey. It was a really dreadful storm. The Captain had to stay on the bridge 24 hours a day for 5 days. Not far from the Shackleton, the German ship München sank will all hands. The swell height was 22 m (72 ft).  Only four people were on deck- the bosun, an engineer, a seaman, and Ian. When they went to recover a mooring, a huge wave burst over the ship. Ian climbed up the A-frame and the water completely covered him. The bosun and engineer were under 6 meters (20 ft) of water with the seaman. As the wave subsided, Ian looked down at the bosun and burst out in laughter (They had survived!). The engineer was found hanging on to the winch. After looking around for the seaman, they found he had washed through a scupper (huge opening), hanging on for dear life. He could have washed straight through. The good news is they all survived to tell the story!

Ian will be sorely missed at sea.