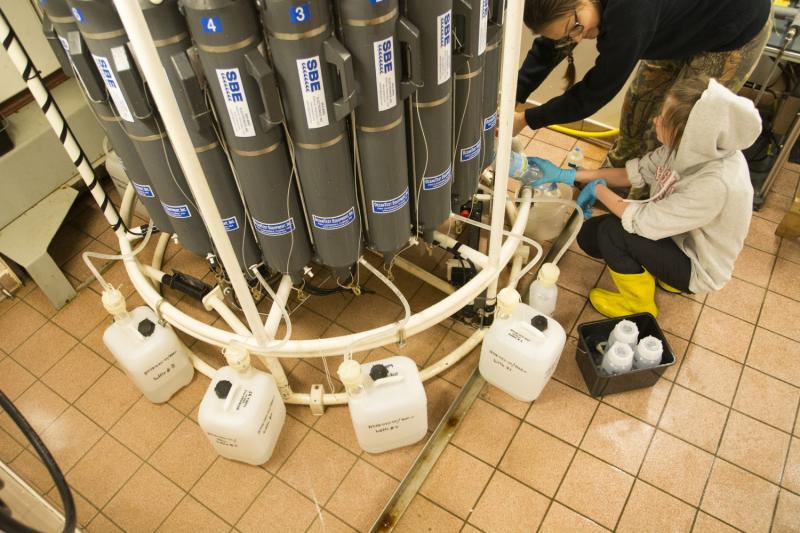 We had a little bit of rough seas last night, but it is much calmer today. Packing and paperwork are consuming a lot of the expedition members’ time.

Scientist Spotlight: Isotope Geochemist Georgi Laukert (GEOMAR). Just hearing the word isotope makes me wrinkle my eyebrows. I wasn’t familiar with the term isotope at all until Georgi spent a lot of time explaining the importance of isotopes and why he finds them so exciting to study. According to Georgi, the study of isotopes is increasingly becoming applicable to new scientific realms. To even begin to get an idea of what an isotope is, you need a basic understanding of chemistry. Instead of talking about basic chemistry, I would like to focus on what Georgi studies and why.

Georgi studies the oxygen, barium, silicon and neodymium isotopes. Stable oxygen isotopes, 16O, and 18O enable scientists to determine the contribution of the Arctic rivers to the Arctic ocean and to investigate sea-ice related processes. Barium and silicon are tracers for biological activity such as diatom growth. Neodymium is used as a water mass tracer. Since neodymium is a rare earth element, he needed to collect enough water to make sure there was enough volume to study. He is shipping over one ton of water to the GEOMAR Institute in Kiel, Germany. It may take up to two years to study the isotopes, depending on how many people help with the process.

In the lab, everything has to be clean and is made of plastic to avoid contamination. The idea is you don’t want any particles in the lab like dust and dirt. These labs maintain positive pressure meaning the air is flowing outward. So, when you open the door to the lab the air is being sucked out. Usually there are nonskid mats in front of the door, and/or there is an Arctic entry,  a tiny room before the main lab.

One of Georgi’s interests is developing new isotope systems. Depending on the system you can apply isotopes to study different processes in nature; for instance, to determine the geographical origin of any material like seawater.

Applications of isotope study can be applied to areas such as anthropology, when anthropologists measure human teeth from prehistoric times to reconstruct the diet. Another new application could be used for studying osteoporosis by measuring urine.

BIRDS! The word skua derives from sku’gvur, the Faroese name for the Great Skua, which has a large breeding colony on the island of Sku’voy. The smaller skua species are also known as jaegers, a German word for “hunter” and an allusion to the jaeger’s predatory nature. Skuas and jaegers nest on the arctic tundra, but spend most of the year at sea.

Pomarine Jaeger. Stercorarius pomarimus, meaning “skua with a covered nose,” referring to the saddle-like cere (fleshy part) at the base of the upper beak. Pomarine jaegers nest May-August on low-lying arctic tundra including in Siberia. They migrate singly or in small groups of 2-3 individuals to tropical and subtropical oceans worldwide.

Jaegers are strong, acrobatic fliers. They commonly pursue gulls and terns, forcing them to disgorge their food, then snapping it up before it hits the water. This habit is called kleptoparasitism. These birds also feed on fish, insects, carrion, trawler discards, small mammals and adult birds and their chicks and eggs. (The Arctic Guide, Sharon Chester)