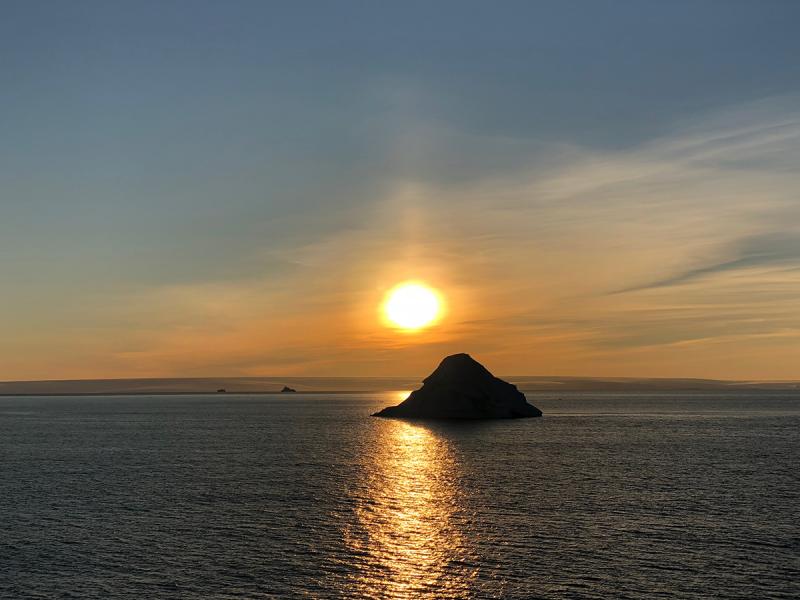 We are now in the Kara Sea headed southwest for Arkhangelsk trying to avoid an oncoming storm. The weather is blustery and the sea is rough. Everything we loaded and unpacked on the ship in Kirkenes is being packed to be ready for unloading. The rosette lab space is almost empty, and the hangar, my ‘office’, is also becoming skeletal. My ‘chair’ made out of stacked boxes keeps disappearing and I keep having to make another one.

I would like to talk a little bit more about our stopover at Baranov Science Station. Cape Baranov is a headland in Severnaya Zemlya, Russia. The Laptev shore of present-day Severnaya Zemlya was discovered by Boris Vilkitsky in 1913 during the Arctic Ocean Hydrographic Expedition on behalf of the Russian Hydrographic Service. He was unaware that there was a strait west of the cape between what is now Bolshevik Island and the islands further north. The straits are frozen most of the year, forming a compact whole land mass.

This cape was named during the 1930-1932 expedition to the archipelago led by Georgy Ushakov and Nikolay Urvantsev after Soviet scientist Fedor Baranov (1886-1965).

Located near Cape Baranov, roughly 15 km (9.3 mi), the Prima Polar Station of the Arctic and Antarctic Research Institute (AARI) closed down in 1996 and reopened in June 2013 as a private venture. This is currently the only Arctic research facility operating in Severnaya Zemlya.

A number of governments maintain permanent research stations in the Arctic. Research stations are also known as Arctic bases, Polar or ice stations. These bases are widely distributed across the northern Polar region of the earth.

Historically, few research stations have been permanent. Most of them were temporary, being abandoned after the completion of the project or owing to lack of funding to continue the research. Some of these facilities are constructed on land or on ice that rests on land, while others are drifting ice stations built on the sea ice of the high latitudes of the Arctic Ocean. (Wikipedia)

A group of Russian scientists and students toured the Station to see what the science research capabilities might be; what are the possibilities now and what can be done in the near future to improve the facilities. The intention is to expand and open the Station to other researchers because of the huge interest to the scientific global community.