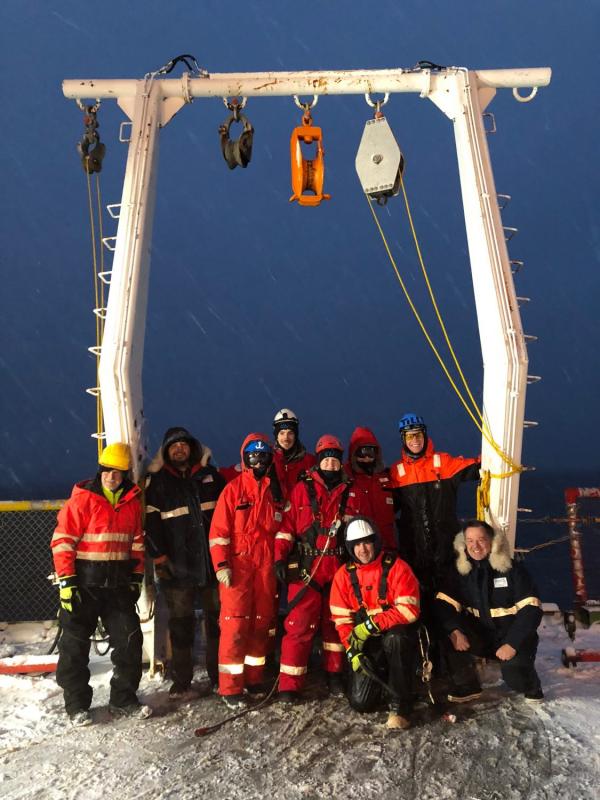 Another exciting day! We woke up to snow this morning and the last mooring recovery for this cruise is scheduled for today.

This mooring recovery was a little bit different from all of the rest. What started out during daylight in moderate weather, ended up in the dark with blustery wind and snow. The zodiac was used again, to recover an Acoustic Doppler Current Profiler (ADCP) with a fragile frame that was positioned at the top of the line. PhD Student Till Baumann was a part of this reconnaissance team. After Till finished this mission, he took over the winch control from Mooring Leader Ian Waddington to finish the mooring recovery. Now, the data will be downloaded from the instruments before packing and getting them ready to be unloaded from the ship. The hangar is becoming very empty again. It is a bittersweet feeling of knowing the end of the cruise is approaching, even though everyone is excited to go home. The mooring deployments and recoveries took a huge amount of collaboration, with the NABOS and CATS science teams, in order to be the success that they were. A job well done Mooring Team!

Whipping wind, and rain is pouring.

May the weather keep on soaring,

We shall get it back, our mooring.

PhD Student Till Bauman climbing the rope ladder from the Zodiac back to the ship.

The Zodiac being lifted back to the ship.

Mooring Technician Carina Engicht geared up and ready to go.

Mooring Leader Ian Waddington taking down the stopper chain at the end of the mooring. PhD Student Till Baumann and Co-Chief Scientist Rob Rember lend a helping hand to Ian.

The mooring team retreating to the hangar after the completion of their last mooring.

This morning we passed icebergs in the distance that seemed to be stuck on the Siberian Shelf. We are headed northwest to complete our CTD casts and then we will turn to the southwest toward Severnaya Zemlya, a group of islands. The plan is to drop off fuel at the Baranov Science Station. The sea is much rougher today. We have been very lucky with how calm the weather has been. Apparently, we are between two storms, one to the east and one to the west.

So far, two polar bears have been sited. The more recent one was on September 17 as we were passing an ice floe in the Northeast Siberian Sea. There is still the chance we might see polar bears as we get closer to Severnaya Zemlya. In the meantime, here is some interesting information about polar bears.

Genus URSUS. Polar Bear Ursus maritimus (seafaring bear). Polar bears are found on the Arctic Ocean sea ice and on adjacent landmasses. Six distinct population centers exist, including the north coast of Siberia. Their length ranges between 200-305 cm (79-120 in), and they weigh between 150-600 kg (330-1,325 lb). Polar bears are the world’s largest land carnivore.  Their fur can be white, yellow, gray, or light brown depending on the season and light conditions. The coat consists of an outer layer of glossy guard hairs overlying a thick undercoat, which in turn covers a heavy layer of subcutaneous (beneath the skin) fat. Mixed within the dense undercoat are hollow, translucent hairs that trap warm air. The nose, lips, and skin are black.

Seals, especially ringed seals and their young, are the main prey. While ringed seals are the most common prey, the polar bear’s diet extends to harp, hooded, and bearded seals, walruses, bodies of dead whales and caribou, nesting seabirds and their eggs, mussels, crabs, and small amounts of seaweed, lichens, mosses, sorrel, sedges, and grasses. Human encroachment into polar bear habitat has resulted in the bears’ expanded taste for gourmet items such as bacon, cheese, fruit, trail mix, jerky, engine oil, rope, rubber boats, tents and even snowmobile seats. Within the past decades, polar bears have been threatened by pollution, oil spills, and shrinking of the coastal ice due to climate change.

Birds! During  the first big ice station on September15, PhD Student Channing ‘Diesel’ Bolt spotted an Ivory Gull with a mouthful of polar cod and one in full flight!

GENUS PAGOPHILA. Ivory Gull Pagophila eburnean (ice-loving ivory-colored gull). The Ivory Gull nests during June and July on rocky coasts, including the Russian arctic islands. They winter on the arctic pack ice, especially ice around polynyas (polar sea that remains mostly unfrozen).  The gulls take fish and small invertebrates by dipping, surface plunging, and wading in shallow water; and follow polar bears and hunters and feed on scraps from their kills. They breed in small colonies on wide upper ledges of steep coastal or inland cliffs, broken ice fields, or barren rocky shorelines.

There has been a rapid decline of Ivory Gulls due to climate change, pollution, and increasing human intrusion and hunting within breeding grounds.

A polar bear spotted on an ice floe in the Northeast Siberia Sea. September 17. (photo by Simon Hummel)

A close-up of a Ringed Seal. If you look closely you can see the irregular white spots on the left side of its body. September 15, Northeast Siberian Sea. (photo by Channing ‘Diesel’ Bolt)

A snowman on watch.