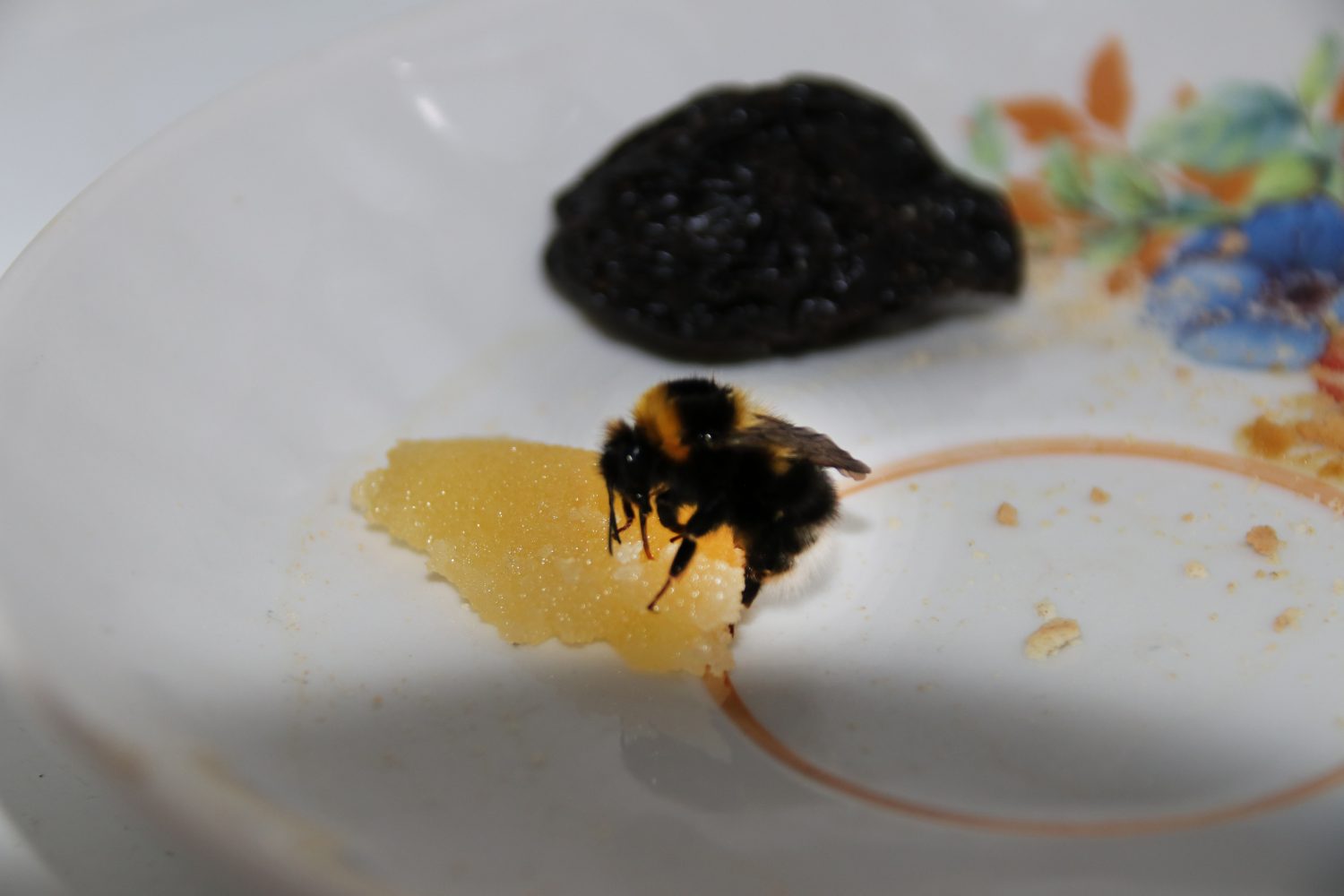 We are still slowly moving south. The ocean is a little rough today, enough for the bridge to announce that a huge swell was coming and to make sure everything was secure. This morning’s mooring recovery was tough. The crew had to wear goggles, sun glasses or some other type of eye protection because of the blowing snow that turned to sleety hail.

I have a very special story to share today.

A few days ago, after lunch, while Ocean Engineering and Sea Ice Physics student Simon Hummel was on the lower aft deck waiting for a UCTD cast to begin, he spotted a wet frozen bumblebee that could barely move. The UCTD cast was canceled. Simon thought perhaps the bumblebee was still alive so he took it to his cabin. Before dinner he tried to feed her honey and water, but she didn’t eat. Instead she flew to his bed and took a two-hour long nap. After napping, she flew to Simon’s desk, and took a rest before flying back home. Simon made her a little house next to the porthole where the climate is a little cooler. The next morning, Simon tried to feed her again, but all she wanted to do was sleep. During a discussion at lunchtime, it was decided her name would be Rosetta, affectionately named after the CTD rosette. When we checked on her after lunch she was in her little house. And guess what? She was eating honey! The good news is she is still alive! Today when I stopped by to check on her she wasn’t in her house. I looked around for her, but couldn’t find her. I was so worried that something had happened to her. A little later at lunch, I told Simon I couldn’t find her. He said she was taking a nap near the port hole. When I went back to check on her, she was hiding underneath a piece of paper in the corner below the port hole. I very quietly lifted the paper trying not to disturb her. She said hello by raising one of her legs. Simon had told me this is the way she greets people, and sure enough she did! We will keep you posted on how Rosetta is doing.

The other special note I would like to add is Simon’s last name is Hummel which means bumblebee in German. How appropriate!

The big question is: Where did Rosetta come from? Did she fly onboard after the storm? Did she get onboard in Kirkenes? Archangelsk?

Marine Ecologist Vasily Povazhnyy let me know that it is not uncommon for science team members to adopt spiders and insects like flies and provide homes for them in their cabins. But, he said a bumblebee is not a common pet onboard a ship.

The following is some information about Arctic Bumblebees, Family Apidae:

Like their honeybee relatives, these social insects forage actively at flowers, feeding on protein-laden pollen and sugary nectar. Nectar is especially important as it provides energy for flight and for generating internal body heat. Bumblebees require a body temperature of 35˚C (95˚F) to be able to fly. They produce the needed heat by rapidly contracting, or shivering, the flight muscles in the thorax. By generating their own body heat, bumblebees can remain active in cool temperatures and later warm the eggs and larvae as they develop in the nest.

About 20 species of bumblebees have been recorded in the Arctic; Bombus Polaris and Bombus hyperboreus are the best known. The species are difficult to tell apart unless seen together, when the smaller size, paler color, and narrower black tail band of Bombus polaris is apparent. In both species, the queens (fertile females) survive the winter. (The Arctic Guide, Sharon Chester)

For more interesting information you can google why Bombus hyperboreus queens are called cuckoo bumblebees.

Rosetta taking a nap next to the porthole. (photo by Simon Hummel)