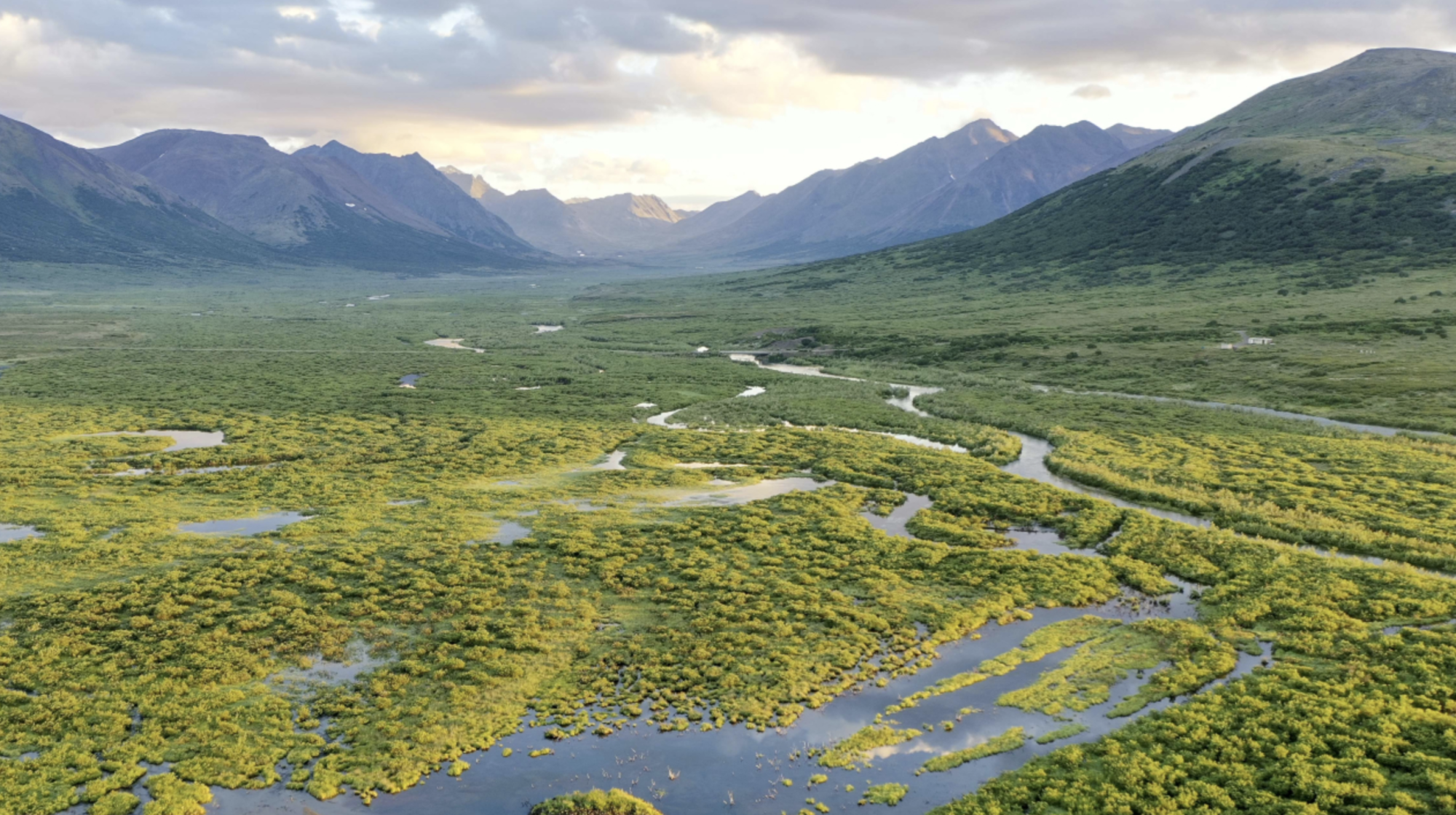 This week, IARC scientists are presenting their work alongside thousands of colleagues from around the world at the 2021 American Geophysical Union fall meeting. These Science Shorts, first published in the Fairbanks Daily News-Miner, highlight some of that work. You can also find out more about UAF at AGU by searching for #UAFxAGU on Twitter, Instagram and Facebook. [Photo credit Ken Tape]

Four International Arctic Research Center researchers are among the authors of the 2021 Arctic Report Card, an annual summary of the state of the Arctic environment produced by the National Oceanic and Atmospheric Administration.

The Arctic Report Card, which has been issued annually since 2006, is intended for a wide public audience that includes scientists, teachers and students. The Arctic is a particular area of focus for researchers because the region is being disproportionately affected by climate change.

The report was released on Tuesday at the fall meeting of the American Geophysical Union. Areas of focus in the report include oceans, weather, research and fisheries.

“It provides an annual update on the key things that are happening in the Arctic physical environment,” said Gabe Wolken, a geologist with the Alaska Department of Natural Resources and a research assistant professor at UAF’s International Arctic Research Center. “It uses data to provide an indication of how things are going in a part of the world that’s typically very difficult to measure.”

Wolken wrote a section in the report that highlighted emerging hazards related to permafrost and glaciers. Other International Arctic Research Center authors include Rick Thoman, Tom Ballinger, John Walsh and Uma Bhatt, they are among 12 authors from the University of Alaska Fairbanks.

Fire season begins while snow is still on the ground in Alaska, starting with an annual March meeting when fire managers look at how the months ahead may unfold.

For each of the past two springs, University of Alaska Fairbanks researchers have added their own insight into the process. Using fire data from the past quarter-century and publicly available weather forecasts, they’ve offered forecasts for fire danger around the state. Such work could help fire managers decide how to allocate resources throughout Alaska.

“We’re trying to give them these seasonal forecasts as an extra tool to see if they’ll help,” said Cecilia Borries-Strigle, a graduate research assistant at the International Arctic Research Center and Geophysical Institute.

The UAF research team uses the data, which includes temperature and precipitation forecasts, to create a “buildup index” for dry surface fuels in 13 Alaska geographic zones with high fire activity. Their 2020 and 2021 forecasts nailed the fire danger in some areas and missed in others, including Interior Alaska.

Some research indicates that such forecasts seem to do better during high fire-danger years. A few relatively quiet wildfire seasons in Alaska could be skewing some short-term results, so researchers will likely wait for a larger sample size before making significant changes. Smaller calibrations to the forecasts could be part of the upcoming forecast for 2022, Borries-Strigle said.

“We’re learning about the models and also figuring out how to present that activity to fire managers in a way that’s useful to them,” she said.

As the need to address climate change becomes more urgent, a variety of geoengineering proposals are emerging to ease its environmental impacts.

It’s a trend that could bring its own set of problems, said International Arctic Research Center researcher Alec Bennett. That’s because no international framework exists to encourage countries to work together to evaluate and implement scientific solutions.

One idea proposes using massive wind-driven pump systems to generate more sea ice in the winter, while cooling in summer. Another ponders whether sprinkling tiny microbeads onto polar ice would help it better reflect solar energy rather than absorbing it.

“There are a lot of concerns about unintended consequences,” said Bennett, who also is affiliated with UAF College of Business and Security Management. “How reversible are these solutions?”

Without better cooperation, it’s more likely that a country will push forward with an ill-advised plan, he said, boosting the potential for conflict. Arctic nations, which are more influenced by climate change, could also be disproportionately affected by those geoengineering remedies.

UAF’s Uma Bhatt and Troy Bouffard also contributed to research on the topic.

“We’re not arguing against geoengineering, we’re just saying we need more understanding and better agreements in place before we go forward,” Bennett said. “We don’t want something intended to help to do more harm.”

Learn about other presentations at AGU by IARC researchers and students.