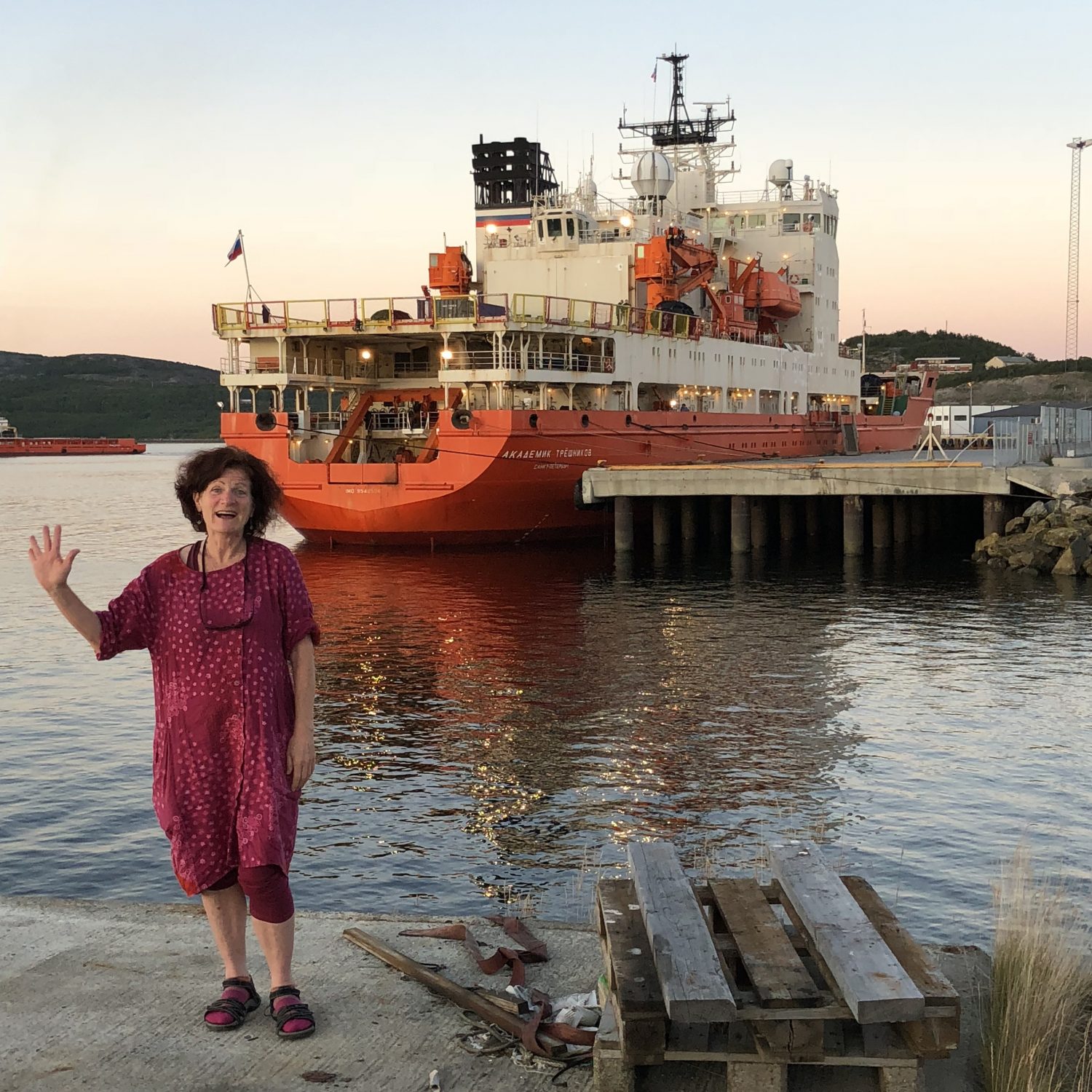 Oceanographers at the University of Alaska Fairbanks International Arctic Research Center embark this week for a 55-day research expedition in the eastern Arctic Ocean. This year, Fairbanks elementary school teacher Moira O’Malley will join the team. “I am ecstatic about this opportunity,” O’Malley said.

O’Malley will write a daily blog, providing updates that are exciting, fun, and written to get youth interested and involved in Arctic research. Her second-graders at Watershed School in Fairbanks will be among many Alaska students and educators following along. Once a week, students will get to ask O’Malley questions about research and life on a 438-foot scientific vessel, the Akademik Tryoshnikov.

O’Malley has always been interested in exploration. An adventurer and marine biology enthusiast, she has dreamed of joining a ship-based research expedition since taking Introduction to Marine Biology from UAF professor Henry Joseph Niebauer in the early 1980s. “He was an oceanographer and did research in the Bering and Greenland seas,” she said. “It started back then. I would beg him to let me go on the explorations. I even offered to cook.”

Last year, O’Malley met Rob Rember, who is an associate professor at UAF, researcher with IARC and father of one of her students. The two hit it off over discussions of water chemistry and marine biology. “It was Rob’s idea,” said O’Malley about the offer to join the 2018 Arctic research cruise. “I was in total disbelief … I wanted to scream, I was so excited.”

With a background in journalism, teaching and biology, O’Malley is passionate about the Arctic and educating youth. “I love water and I love ice,” she said. This cruise is appropriately timed since her class is learning about snow and ice this year.

This year is also special for the research cruise. Scientific access to the Nansen and Amundsen Basins, where the cruise collects data in the eastern Arctic Ocean, has not been granted since 2015. These basins are critically situated in the pathway of warm Atlantic water entering the Arctic Ocean. UAF professor Igor Polyakov began the Nansen and Amundsen Basins Observational System in 2002 to monitor and understand changes in these waters.

In recent years, the Arctic Ocean has undergone tremendous change. In recent decades, the amount of sea ice has decreased 13 percent per year. In the last 15 years, ice thickness in the eastern Arctic Ocean was reduced by a half meter. “Only by continuous observations can important issues related to climate change in the Arctic be addressed,” Polyakov said.

The multidisciplinary team of international scientists, of which Rember and Polyakov are a part, conduct ship-based oceanographic surveys and deploy moorings — cables anchored to the sea floor with scientific instruments attached. Thanks to these observations, the team now knows that ocean heat changes are melting the Arctic sea ice from below at the same rate as a warming atmosphere is melting it from above.

One of O’Malley’s jobs will be to work with the multinational group of scientists to collect water samples. They will allow researchers to better understand how salinity and temperature play into Arctic Ocean warming, and also to understand those effects on Arctic Ocean biota.

O’Malley sees herself as the bridge between the science onboard and the public back home. “My role is to get the information out there to educators and students,” she said. “I interpret that as meaning I am the lay person who is relaying what is going on to the broader public.”

Follow along with O’Malley’s cruise updates on her Teacher At Sea blog.

Moira O’Malley, left, poses with her Watershed Charter School students during a field trip to the Fairbanks ice park last winter. O’Malley’s class will follow her this fall as she participates in a 55-day research expedition in the eastern Arctic Ocean.

Fairbanks teacher Moira O’Malley poses in front of the Arctic research ship Akademik Tryoshnikov, which she will live on for the next 55 days.

This week, Fairbanks teacher Moira O’Malley arrives in Kirkenes, Norway, where she will join international scientists for a 55-day research expedition in the eastern Arctic Ocean. The team will study changes taking place in the Nansen and Amundsen basins.

Heather McFarland is the science communication lead for UAF’s International Arctic Research Center. She can be reached at 907-474-6286 or .